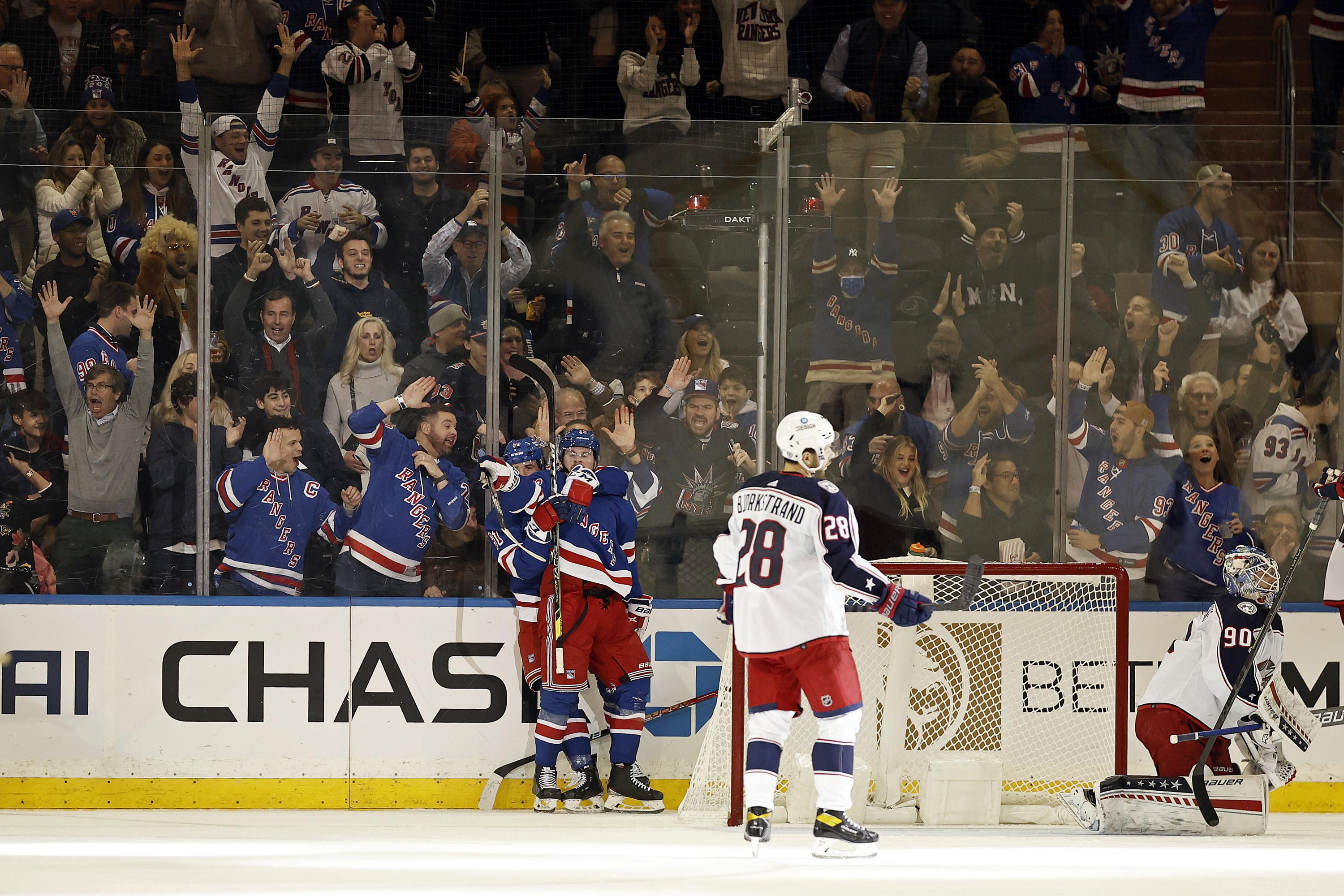 “We handled the puck really well,” said Rangers coach Gerard Gallant. “I didn’t think we turned him around as much as in the previous game. Our failure before was much better. I thought we had 20 guys ready to play tonight. That was the big deal. … Tonight’s game was the most complete we have played.

It’s a big rebound victory for the Rangers, who lost 5-1 at home to Calgary on Monday night after a 4-0-0 road trip.

“The last game was not good for any of us,” said Fox. “It was definitely a better performance today. … We played smart.

Shesterkin made 12 saves in the first period, seven in the second and 12 in the third to bring his record to 4-1-1 with a 1.81 goals-against average.

“He’s been amazing,” Gallant said. “He was in the zone tonight. He is athletic. He is strong. I think he’s one of the best goalies in the league, without a doubt.

Elvis Merzlikins made 33 saves for Columbus, who lost for the third time in five games and fell to 0-2-0 on the road. Merzlikins went 4-0-0 with an average of 1.47 in his first four starts.

“I enjoyed our first six or seven minutes,” said Blue Jackets coach Brad Larsen. “Then, blown blankets. … We stopped skating, we gave up too much and then it snowballed the wrong way.

The Rangers started the third period on a power play that continued from the second. Kreider took the opportunity to deflected a Panarin pass on the right side in front of Merzlikins to increase the lead to 3-0 at 1:19.

Kreider deflected a fox shot on the right side with 8:37 remaining with the Rangers on another power play for his sixth of the season. It was New York’s fifth power play goal on 29 occasions this season, all by Kreider.

“To get those two through Kreids on the power play, that was really key for these guys,” said Gallant. “I hope that will give them confidence and that they will keep moving forward.”

Leading 2-0 after 20 minutes, the Rangers controlled play for much of the second period. Shesterkin made a stellar save on Oliver Bjorkstrand ahead in a Blue Jackets power play 7½ minutes into the middle period, keeping Columbus off the scoreboard and blackmailing “I-gor!” I-gor! From the crowd at Madison Square Garden.

Merzlikins stopped a tip from Kreider with 6.5 minutes left, a Strome shot just 20 seconds later and a Lafrenière attempt with 4.5 minutes left in the period. The goalie also made several good saves in the final minutes and sprawled out on the ice and used his right pad to cover a puck that bounced off the ground boards with about 20 seconds left.

The Rangers outscored the Blue Jackets 13-12 and scored two goals in three minutes in a hectic first period.

“It was definitely our best start,” said Kreider. “We were engaging the pucks deep, moving our feet. This is definitely a big step in the right direction for us.

Columbus started strong, getting five shots on goal in the first two and a half minutes. New York then gained intensity.

Strome first put the Rangers on the scoreboard, taking a Panarin pass in the middle and beat Merzlikins high for his first of the season with 7:31 left in the opening period. Rookie defenseman Nils Lundkvist got his first NHL point on the game.

New York doubled its lead as Fox brought the puck behind Columbus’ net and sent a left corner pass through the front of the crease to a streak from Lafrenière, which quickly went pulled him after Merzlikins f or his third with 4:29 to go.

Kaapo Kakko returned to the Rangers roster after missing four games with an upper body injury. New York was also without forward Ryan Reaves, who started early in the first period against Calgary on Monday night. Gallant said Reaves, who is in IR, will accompany the team on their next four-game trip.

Max Domi was back in the Blue Jackets roster after missing four games with a broken rib.

The Rangers honored essential workers, including first responders, healthcare workers, nursing home attendants, transit workers and sanitation workers. Players wore special shirts during warm-ups which were to be auctioned off after the match.

Rangers: In Seattle on Sunday night to open a four-game trip.