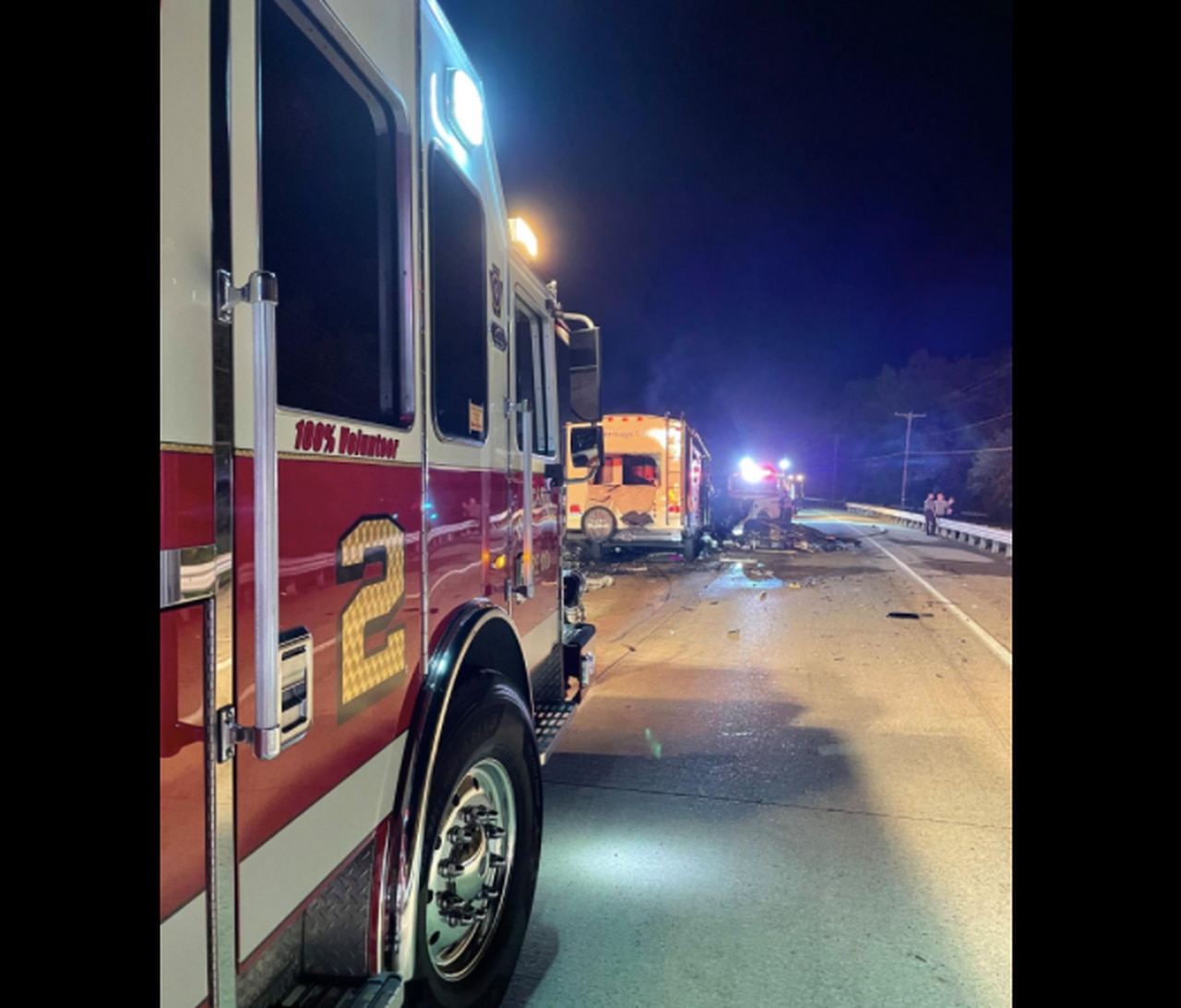 Todd Taylor was on his way to work as a delivery truck driver on Saturday night when he turned the corner on Route 322 and saw someone standing in the middle of the dark highway frantically waving a flashlight.

Behind this person, in the left lane against a concrete jersey barrier, Taylor saw a mutilated pickup truck with an RV locked in a smashed pickup truck, all covered in smoke.

His instinct as a former volunteer firefighter in Lewistown took effect. He parked his car in the left lane, turned on his hazard lights to try to prevent others from reaching the scene of the accident, and took action.

Taylor was among a handful of passers-by, including professional racing driver Kasey Kahne, who stopped to help after the 10:38 p.m. crash on Saturday about three-quarters of a mile west of Mountain Road in the Middle Paxton Township.

A driver on the wrong side had driven at least six miles on Route 322 against opposing traffic before hitting the truck and motorhome head-on, witnesses said.

The couple with the camper were on their way home from Port Royal Speedway racetrack when they were surprised by headlights in their lane. Kahne was also leaving the track after participating and was among the first people to stop in the crash in the eastbound lanes.

Kahne could not be reached for comment, but Taylor said he heard a passer-by calling for help shortly after exiting his vehicle. They shouted that one of the vans was on fire and the unconscious driver was trapped inside the locked vehicle.

Someone specifically asked for fire extinguishers and Kahne picked one up on his tour bus.

As Taylor and others struggled to get occupants out of the burning vehicles, Kahne and a second man used fire extinguishers in an attempt to keep the growing flames out, witnesses and firefighters said.

Taylor ran to a white van and used a flashlight he kept on his belt to punch through the driver’s side window. A curtain airbag covered the inside window, protecting the driver from shards of glass.

Taylor reached out and searched for the button to unlock the door. With the door open, he reached out to the driver, unfastened his seat belt, and began to pull him by the shoulders.

He got the driver out halfway, then the driver’s feet got stuck under the steering wheel. Someone else, Taylor doesn’t even know who, helped dislodge his feet and together they carried the man on one shoulder, away from the burning vehicles.

At that point Jason Sheaffer, the Deputy Fire Chief at Richfield, drove in the westbound lanes past the wreckage, as he returned home after a night out in Lancaster with his wife. He saw the driver pull away from the burning van and pulled over as soon as he could.

Sheaffer helped remove a female passenger from the truck pulling the camper van and place her near the railing, away from burning vehicles. She was alert but seriously injured.

Just then someone shouted that there was another trapped driver. Taylor and Sheaffer both heard the cry for help. Another passerby stayed with the injured woman and continued to talk to her to keep her alert.

That’s when Taylor dived into the truck and started pulling the driver by the shoulders. Sheaffer climbed into the backseat and helped free the driver’s legs, which were getting stuck in the steering wheel.

“We knew we only had a few seconds,” Sheaffer said. “The flames and smoke were reaching the point, we recognized that this man had only a few moments.”

Together, they transported the driver to the other side of the road. They later had to move it further as the fire grew more intense and made loud banging noises.

As a firefighter and emergency medical technician, Sheaffer said he was immediately impressed with Taylor’s skills.

“I told him, ‘I don’t know who you are, but you’re a godsend,’ Sheaffer recalls.

Several passers-by had called 911 to report the wrong way driver and later the accident. One of the passers-by handed Sheaffer his phone at one point to help direct incoming emergency vehicles and give medical updates on the injured so crews could be prepared.

The driver of the truck pulling the camper van appeared dead, Sheaffer said, and was advising dispatchers.

“We have two Class 1 patients and one DOA,” Sheaffer reported, but then heard someone shout, “No he’s moving! “

Sheaffer updated his report to dispatchers: “Put three in Class 1 and I’ll need a helicopter.” “

Meanwhile, Taylor was left with the truck driver pulling the camper van, who started talking to rescuers after being pulled from his truck.

On command, the driver moved his toes and spoke with rescuers until the ambulance showed up.

When the deputy chief of the Dauphin-Middle Paxton fire company, Shane Swenson, showed up within minutes of their dispatch, the three occupants had exited their vehicle. The wreckage was engulfed by heavy fire.

“If no one had stopped and pulled them out,” he said, “they would have been burned. Fire was everywhere. there is no doubt. There was no way they would get out of the vehicles, but luckily the Good Samaritans pulled them out.

As a general rule, removing someone from a wreck is not advisable as it could make their injuries worse, but with the flames descending, there was no other option, Swenson said.

Firefighters, including from the Duncannon Fire Company, worked together to extinguish the vehicles to put out the fire, which had now spread through the camper van.

“We had to punch a hole in the side of the motorhome and start removing things including a mattress,” said Swenson, describing how they had to take the fuel source apart so the fire could put it out completely. .

The truck that had rolled in the wrong direction had melted down to its frame.

It turned out that the reverse driver died in the hospital. He was later identified as Michael Hoy, 64, of Daytona Beach, Florida.

It is still unclear where he entered the separate highway on the wrong side and why, but passers-by reported swerving to avoid him six miles away near the Fishing Creek exit. Residents in the area wondered if he had the wrong ramp and didn’t know how to turn around. The cause remains under investigation, police said.

Although the efforts of the rescuers did not save the lives of the drivers, they did save the passenger and prevent the firefighting of the drivers, which was all that was possible given the dire situation. they declared.

“I was heartbroken when I heard they weren’t successful,” Sheaffer said. “But maybe they need to have some closure with this extra time with their family.”

Sheaffer said he was proud of the way all the rescuers worked together, especially the seamless way he interacted with Taylor, and an as yet unidentified female rescuer who appeared to have nursing skills.

“I saw humanity come together that night,” Sheaffer said. “Three people got together and worked together and it’s something I’ll never forget.”